Gender in Negotiation / Women Negotiating, in the Workplace and at Home 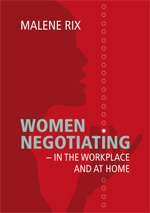 My claim is actually the opposite: women are brilliant negotiators. They strike deals, make lasting agreements, fix things all the time, every day. So why is this perception about women being bad at negotiating so widespread? Even among women themselves? I have noticed, that it is almost always when we talk about negotiating things for ourselves like our salary or the conditions of a new job, that many women feel frustrated and think of themselves as lacking in negotiation skills. The gender pay-gap that exists tells its’ own story, but there is an explanation why this important negotiation feels particularly difficult for many women.

Gender as Filter in Negotiation

The explanation is primarily to be found in the terms women negotiate under; the circumstances surrounding negotiations in which women take part – and these can be changed! Negotiation is all about asking for something but also dealing with getting a ‘no’ to these demands. Gender is a substantial filter we perceive each other through in this situation, and cultural practices and prejudices, tradition and history itself make us expect women to be more modest and compliant than men, particularly when we talk about negotiating on their own behalf. So, research shows that when a woman asks for a substantial pay-rise, it sounds different than when a man does the same. This means that women have to fight harder and still often end up with less in negotiations on their own behalf. Not because they are biologically hardwired to be bad negotiators, but because the framework for this particular process often favors men.

Rather than striving to negotiate in a self promoting or more masculine way, the answer lies both in how we perceive ourselves and prepare for negotiations on our own behalf, and on simply using the tools and techniques we know work. Being ambitious on our own behalf as well as on behalf of others is key, and so preparing ourselves for being challenged on our demands is vital. Using constructive communication- and process-skills will help in the sometimes difficult task of reaching an agreement. We should all strive to negotiate like collaborative and self assured individuals, and when we discover gender bias in ourselves or others, take steps to change the effects of this for the benefit of all.

In my book I present techniques that help make negotiations constructive and fruitful, and tools to prepare and act strategically in the negotiation process itself. The tools and techniques are useful in all negotiations, both those in the workplace and at home.